The Power of Interesting Questions

Today I led two groups of students through an introduction to spreadsheets as part of our Baxter Foundations workshops. Our framing question was, “How much is that Starbucks habit costing you?” Many students, of course, said $0, but we widened the question to include other vices, like Monster drinks, Red Bull, going across the street to Portland Pie every day, or down the street to Five Guys for lunch. And we broadened the question to, “What if you put your money into a retirement fund instead?” To make this real for my students, my friend Tracy admitted to her Starbucks habit and offered to be our real case study.

Before we started creating anything, I asked the students to complete this quick survey to figure out what they knew and what they didn’t. Then we looked at the results as a group. Here’s what we found: 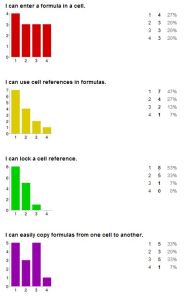 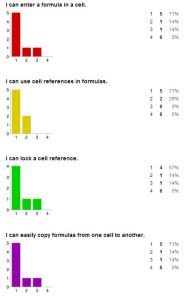 Clearly, the sophomores were bringing more to the table than the freshmen. After all, they had been instructed in spreadsheets in their engineering class last year, but they were still a bit unsure of what they knew. They thought they probably knew more than they had indicated, but didn’t know what I meant by “cell reference,” for example. And remember, I teach in Maine where 7th graders are given their own digital device. It used to be a laptop, but last year many districts changed to iPads. I would have expected the 9th graders to have had much more experience with spreadsheets, but I’m seeing that the switch to iPads is having an impact on that. Very sad.

I began by explaining the situation: Tracy spends $x each day on her Grande Soy Chai at Starbucks. If we want to figure out how much she spending, and what she could be earning instead, what information do we need? And then I had them brainstorm for a couple of minutes.

Information needed: cost of the drink, how much spent each month, and interest rate for the investment.

We made a few assumptions:

But this is also part of problem solving. Take a few minutes to watch Randall Monroe’s TED Talk and you’ll understand what I mean.

So here’s the spreadsheet that we came up with.

So what did we learn?

Do I think the students in this 90-minute workshop will remember everything that we discussed? Of course not – I’ve been doing this job way too long to think that. But here’s the beauty of it all – they have their own model to reference, be it Google or Excel, they all created one and can take another look at any time. I heard from another teacher that a couple of his advisory kids started talking about making their own coffee instead. A couple of my advisory students commented on the experience at the end of the day. One said, “It was interesting to see how the numbers involved in the Starbucks added up if invested in a retirement fund. The actual application was nice.” Another said, “The spreadsheet exercise this morning was fun. I think it was the funnest way to learn how to do a spreadsheet I have ever done. So thank you.”

One response to “The Power of Interesting Questions”