My geometry class has started investigating shapes on coordinate grids. Doing this reminded them that they knew how to use the Pythagorean Theorem and how to find the slope of a line segment. Here’s an example of what they worked on: 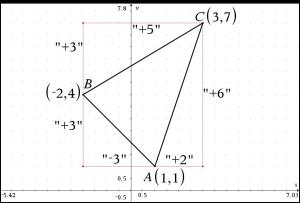 In looking at the slopes of side AB and side BC, which I wrote on the board as slope of AB =

and slope of BC =

. But why would that be true? Vectors. It turns out that this student was learning about vectors in his physics class. I’m not sure that he consciously made the connection, but he did seem to be thinking about vectors. If you travel from A to B and then from B to C, you will have traveled 6 units up and two units to the right. That’s the same result you would get with vector addition.

Imagine what would have happened if I had asked the wrong question, or just replied without asking the question that I did.