Statistics & probability in high school is often saved for 12th grade, though some progress has been made with integrating linear regression into algebra classes.
My school operates on trimesters, so each class is only 12 weeks long. We’ve created an Intro to Statistics class to focus on descriptive statistics during those 12 weeks. It’s really designed for students who are entering high school, not leaving it. I probably should have created this post a couple of months ago, since the term ends on Tuesday, but I’ve been a little busy.

All About the Chips

Early in the term we investigated claims made by Keebler and Chips Ahoy about their chocolate chip cookies. Of course, in order to really investigate, we needed to dissect the cookies and count up the chips. Here are our results (from this term):

Students were asked to write an introductory paragraph and a concluding paragraph. Here’s one introduction:

Are they lying? That’s the question we asked ourselves when we conducted tests to see if either Chip’s Ahoy or Keebler told the truth in their advertisements. Chip’s Ahoy promised 1000 chocolate chips in every bag, and Keebler promised 25% more. Our findings surprised us.

The findings followed, and then this conclusion:

We believe, based on our findings, that Chip’s Ahoy told the truth, while Keebler tried to get away with a misleading slogan. While Chip’s Ahoy had approximately 907 chips per package, which is 93 less than they promised, it would be unreasonable to expect our estimate to be exact, as some cookies may have more chips than others. Because of this, we must grant Chips Ahoy some leeway, as it could simply be our estimate was low. However, Keebler promised 25% more chips than Chips Ahoy. However, the total number of chips in Keebler was actually less than Chips Ahoy. However, we believe “25% more” may be referring to the number of chips per cookie, not per package. Because of this, Keebler may be technically telling the truth, but they are misleading consumers. Chips Ahoy was telling the truth all along.

All About the Class

We also collected some data about the class, including height, arm span, and kneeling height. Students were asked to apply what they learned from the cookie activity to the this new data set. They represented the data graphically: 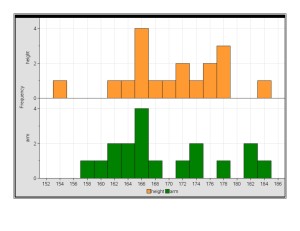 And then described what they saw:

They are similar because they are both a measure of distance/height. They are different because a person’s kneeling height will never be greater than their standing height, which leaves interesting data with you compare the two.

Height: The data for height are skewed to the left with a median of 170.5 cm and an interquartile range of 10 cm.

Armspan: The data for armspan are skewed to the right with a median of 166.3 cm and an interquartile range of 11 cm.

Conclusions: In conclusion, the rule of thumb that you are as tall as your arms are long is mostly true because the median of both data sets is only 4.2 cm off and the fact that the interquartile range is but one centimeter off proves this further.

All About What They Learned

The first unit of the course ends with students finding and analyzing their own data. Data choices included movies, bass fishing, hours in space, world series appearances, touchdowns scored by the Giants and the Cowboys, wealth vs age, costliest hurricanes, and daily high temperatures for Portland, ME and Berlin, Germany. What I love the most about this assignment is that students are able to investigate something that interests them and show me what they’ve learned.

They always come up with topics that I would never think of!

4 responses to “Intro to Statistics (Unit 1)”