The October 2017 issue of Mathematics Teacher included the article “An Emoji is Worth a Thousand Variables,” by Tony McCaffrey and Percival G. Matthews. (Note that you need to be an NCTM member to access the article without purchasing it.) The authors introduced their students to systems by using sets of equations comprised of emojis, similar to those puzzles that are found on Facebook. Lots of people, including those who say they hate math or they aren’t good at math or, “I’m not a math person” will do puzzles like these. They get lots of likes, answers posted in the comments, and shares –  probably because this doesn’t look much like math. Take a moment and solve the puzzle.

What if, instead of the emoji puzzle, I had posted this puzzle: 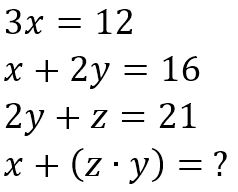 The two are actually equivalent, but the abstract nature of the second representation is enough to make our students who see themselves as not math people shut down.

My fall term teaching partner and I used the emoji approach with our students. We hadn’t discovered the website yet, so we gave our students this short worksheet. Many of our students had struggled with math prior to coming to Baxter Academy. They were in self-contained or pull-out special education settings or in pre-algebra classes in middle school. A few probably had something closer to algebra 1, but they certainly hadn’t solved systems of three or more equations. They had no problems understanding what the emoji puzzles were asking of them. They weren’t put off by the number of equations or the number of icons. They were able to explain their solution process clearly and with great detail.

If the emoji system is more engaging and more accessible, then why don’t we use more of them to introduce systems of equations? Is it because emoji systems seem to “dumb down” the mathematics? The authors of the article make the case against that view:

“The algebra represented in [the emoji system] is not dumbed down at all. Notice that the puzzle presents a linear system in three variables … First-year algebra students are generally not exposed to three-variable systems; indeed, when McCaffrey checked all the first-year algebra texts in his school’s faculty library, none included systems of three variables. Although McCaffrey’s students had never seen three-variable systems before this class, most found the puzzle intuitive enough to solve.”

It is important to transition from emojis to more formal algebra, but it’s not important to start with the most abstract representation – the one that leaves too many of our students behind.